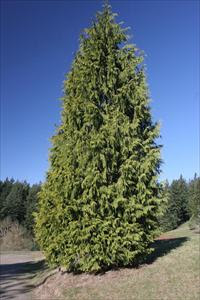 Thuja plicata, commonly known as Western Redcedar, is native to the Pacific Northwest and a is a popular, sturdy, and graceful evergreen frequently used in tall hedges or as a privacy screen. 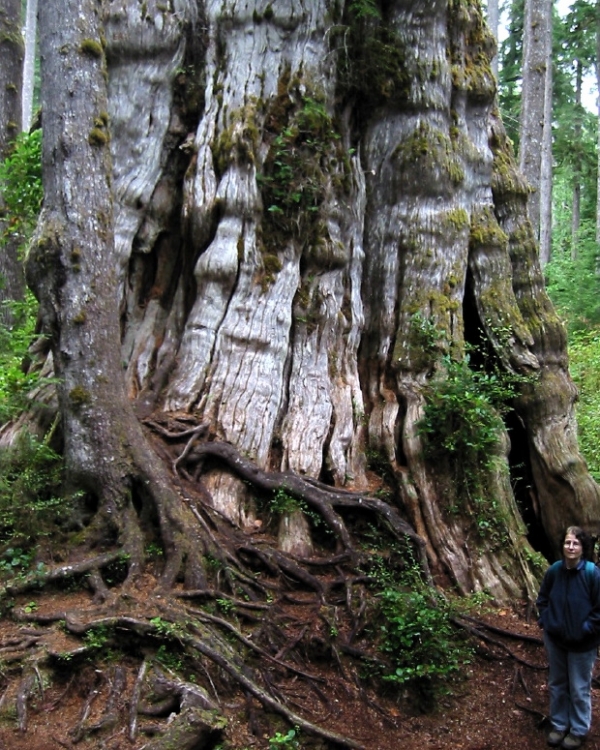 Southwest Oregon is near the most southern edge of Western Redcedar’s range, which extends north into Washington and British Columbia. The largest Redcedars in the world are true forest giants, and can be found in the rainforests of the Olympic Peninsula, where several trees near 200’ tall by 60’ wide have been found.

Because the climate here in the Rogue Valley is hotter and drier that that of the Olympic Peninsula, plants here will generally get about 50-70’ all and 15-25’ wide at maturity, if left untrimmed. 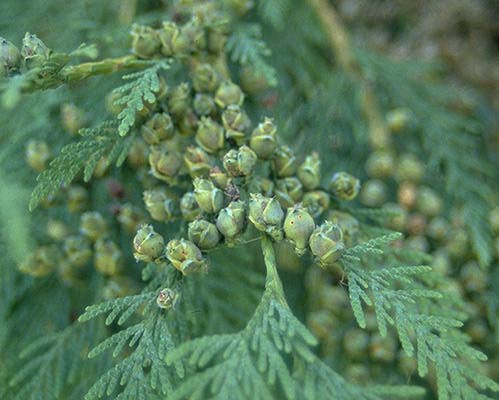 Western Red Cedars look great when left in their natural shape, but they also respond extremely well to shearing or pruning. They grow at a moderate rate – roughly between 15-24”/year - and are generally pest and disease resistant. They’re also very pollinator-friendly, and serve as host plants for dozens of native butterflies and moths. Once established, Western Redcedar is relatively drought tolerant, and will generally only require deep watering once or twice a month.

As a group, Thujas of multiple species are widely used as hedges and privacy screens. They’re all easy to grow, relatively fast growing, have nice densely pyramidal shapes, and are tolerant of clay soils as long as the soils aren’t soggy. You will want to cage them to protect them from deer when they are young, but they grow quickly enough that you'll only likely going to need to do this for the first few years. 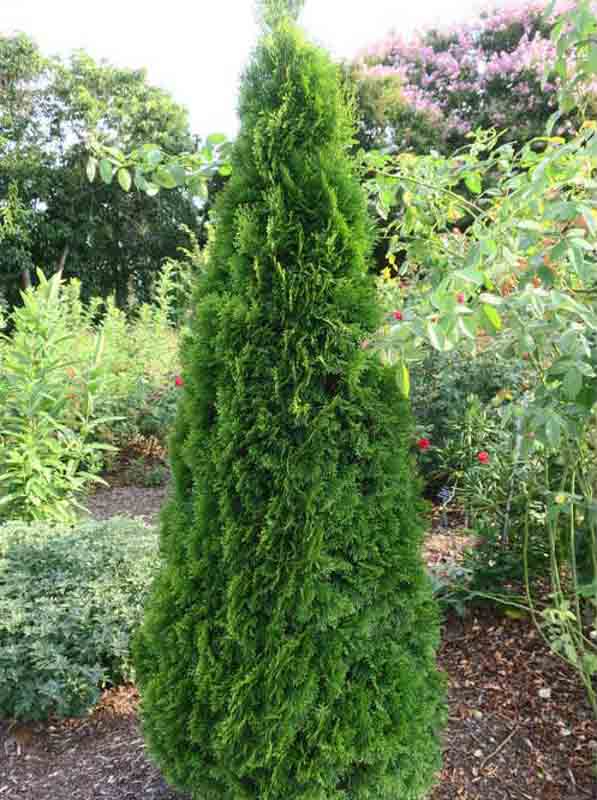 Fun fact: One of the common names for Thuja is Arborvitae (Latin for Tree of Life). Early French settlers to North America gave it that name when they encountered an east coast Thuja species (T. occidentalis), and learned from Native Americans in the region of the many uses the plant had: decay-resistant wood for building canoes and houses, sturdy fibrous bark used for clothing and cording, and roots and leaves with a variety of medicinal purposes. 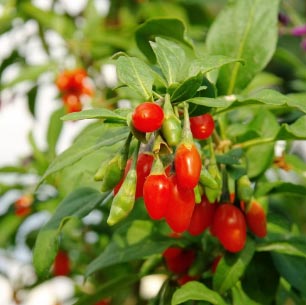 Also known as 'Wolfberry', the Goji Berry is widely recognized as a superfood - with high nutrient and anti-oxidant properties - makes a great addition to your edible landscape. Both the bright orange-red berries and shiny, oval green leaves are edible with an appealing spicy, nutty flavor. The leaves are traditionally enjoyed as a tea, and the berries can be used as a tea or for snacking, baking, or preserving.

Goji berry is self-fruitful, producing small, purple-pink flowers in late spring/early summer that are highly attractive to the bees. It can take up to two years to bear fruit which will be loved by the birds and other browsing animals. Harvest the small, oval, bright orange-red fruit from summer through fall by shaking each branch so the ripe berries fall onto a large basket or bowl. Avoid touching them to avoid oxidizing the skin which turns them black. It's best to enjoy them fresh, frozen, or dried after washing, or refrigerate the berries unwashed for up to two weeks. 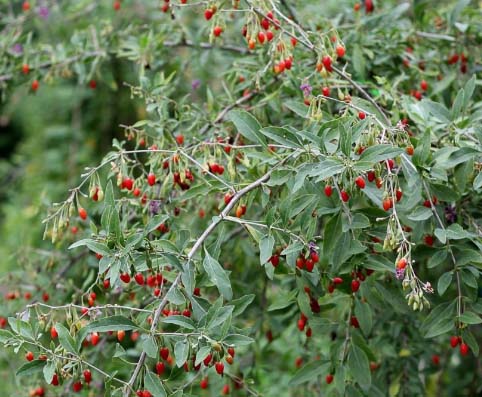 This is a vigorously growing, thorny bush with woody stems and should be seasonally maintained to keep suckers that grow from the base in check. Luckily, they are well adapted for growing in containers. Deer will be attracted to the edible leaves and berries, but this might be one situation where they could be a welcome helper.

Once established, goji berries are heat tolerant and drought tolerant. They perform best when planted in full sun, (with mid-afternoon shade during the high heat of summer), out of the wind, and in well-draining, neutral to slightly alkaline soil. They can grow 8-12 feet tall and wide at full maturity and can be easily pruned to any desired size. 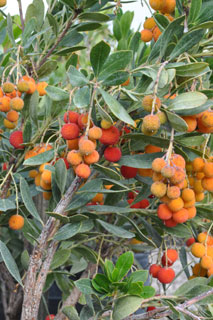 Compact Strawberry Tree is one of our favorites for so many reasons: it can tolerate sun or shade, is drought tolerant, provides fall flowers for the hummingbirds, has long lasting, spectacularly colored fruit and wonderfully shaggy bark - and it's also evergreen!

You can easily see how this relative of our native Madrone and Manzanitas gets its common name of Strawberry Tree. The orange and red fruits resemble strawberries, and although the fruit is technically edible, they are more for suited wildlife as they are bland and mealy in texture (Fun fact: the species name unedo is a combination of the Latin words unum meaning "one" and edo meaning "eat" resulting in "I eat only one", in reference to the technically edible, but distinctly untasty fruit!). 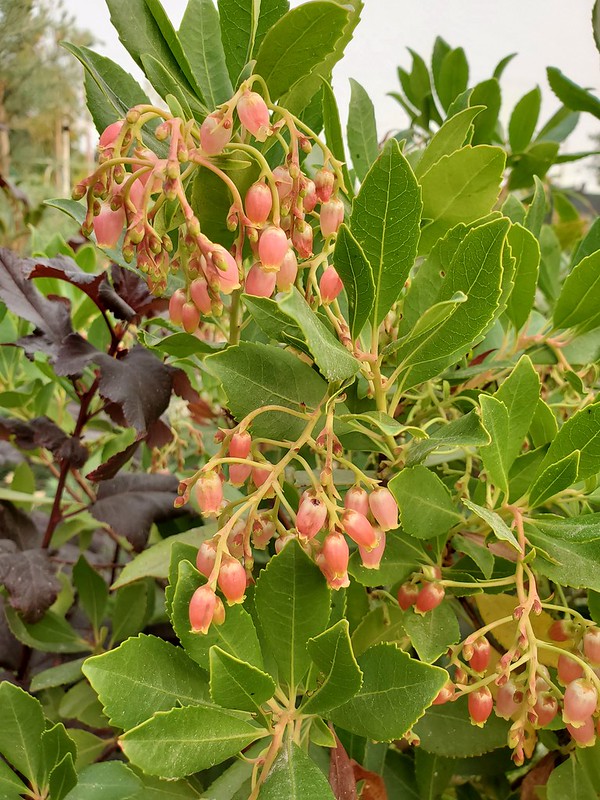 The honey scented, pinkish-white, urn-shaped flowers can appear from fall into early spring and the fruits often come on at the same time or not long after. As with many other fruiting shrubs, some years seem to have heavier fruit set than others - but the fruits are so decorative and long lasting that they don't qualify as messy. With leathery, dark green, oblong leaves, reddish new stems and shaggy auburn bark it is handsome all year.

Compact Strawberry Tree is not the fastest growing evergreen shrub, but it will grow steadily to 5-7' tall and wide (eventually larger). With annual pruning it can be kept tighter and smaller. This is one of those rare plants that is happy in sun or part shade making it a great choice for a hedge with varied conditions. It is also tolerant of various climates and soils. 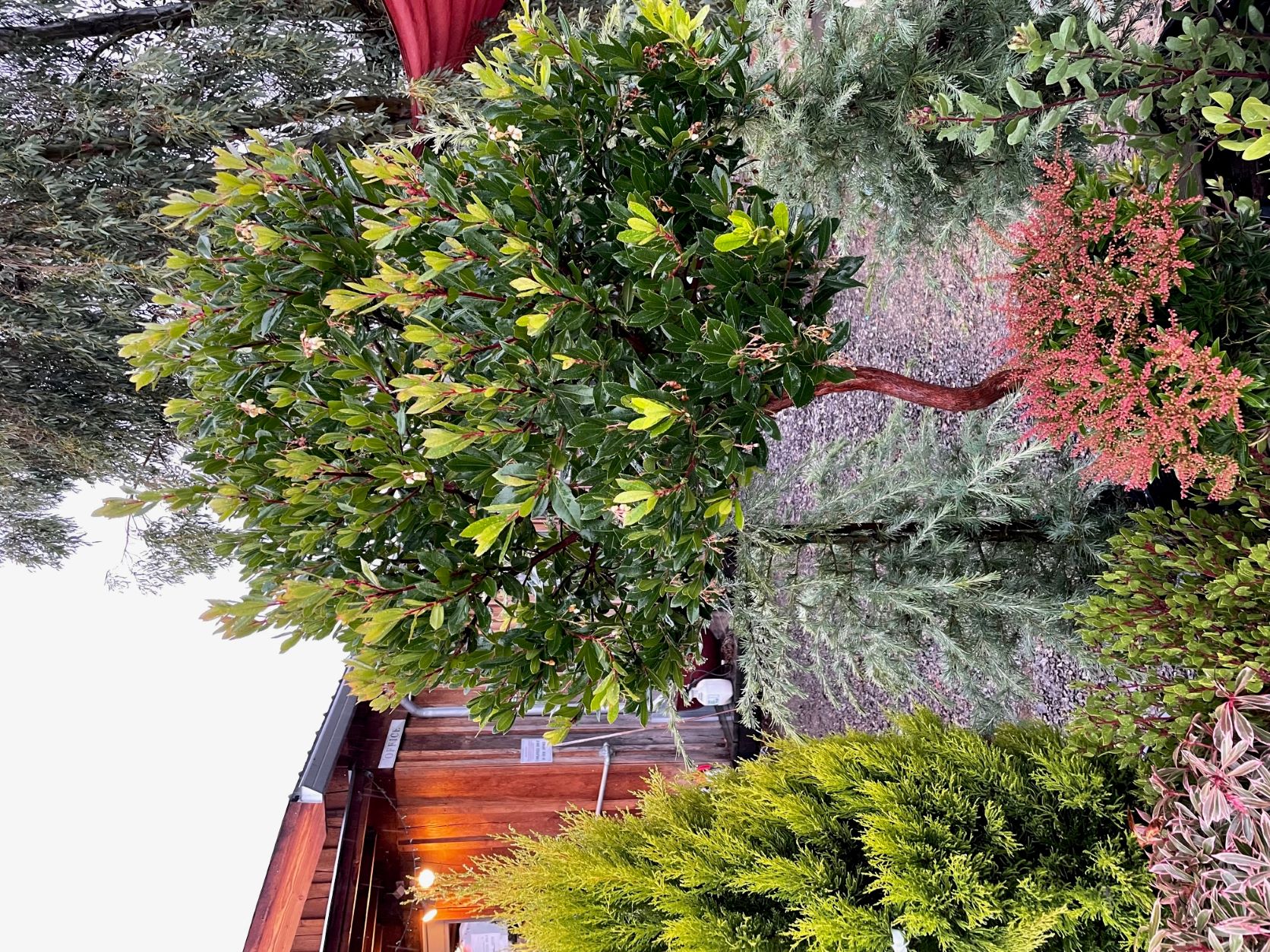 Looking for something a bit taller, but with all the same great attributes as the Compact Strawberry Tree? The full-sized species - Arbutus unedo - gets about 10-15’ tall and wide at maturity. In its native habitat (Britain and the Mediterranean), Arbutus unedo usually grows as a multitrunked plant, but we also carry single-trunked specimens which make a really lovely small tree. 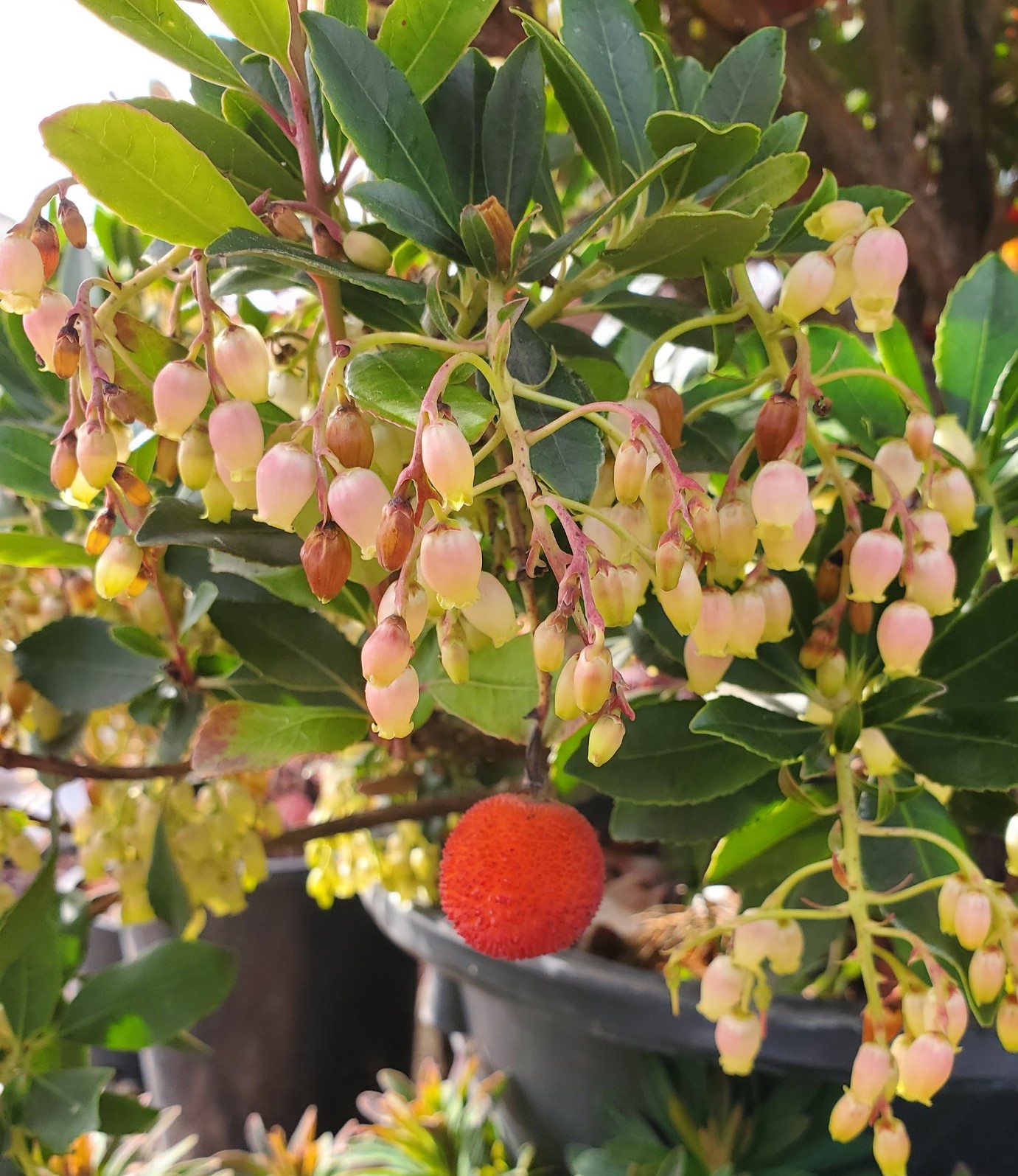 We have some planted on the north side of our house that have done wonderfully with no supplemental water after their first year and even survived the 7-degree winter with no damage! In extreme cold they will show some damage; so best to plant where they are not completely exposed to cold winds. The winter of 2013, where we got to zero degrees for several nights, proved fatal to some Arbutus and some rebounded after suffering damage on top.

Arbutus unedo 'Compacta' is great in foundation plantings or hedges. You will be hard-pressed to find an evergreen shrub with more year-round interest - plus the hummingbirds will thank you for providing a much-needed winter nectar source! 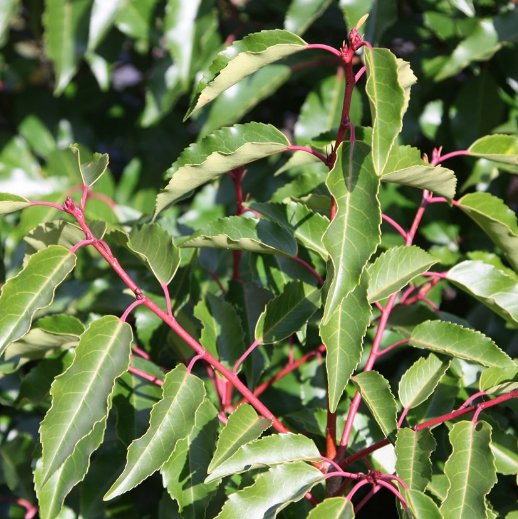 Evergreen hedges are a great way to create a privacy screen, a windbreak, or even a ‘green wall’ to use as a backdrop for a selection of vibrant, colorful selection of shrubs and perennials.

One of the challenges to creating a good hedge here in the Rogue Valley is that you’ll want an evergreen shrub that is both relatively fast-growing AND deer resistant. And one of the very best options we’ve found for meeting both of those criteria is Portuguese Laurel (Prunus lusitanica). 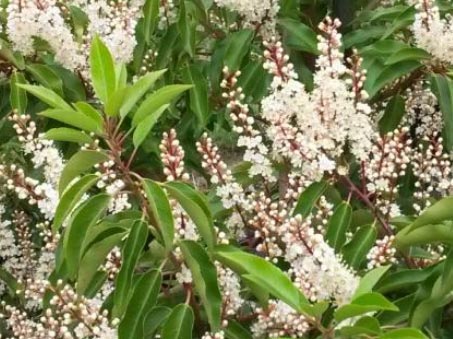 Portuguese Laurel has dark, glossy, leathery leaves that contrast nicely with its wine-red stems. In spring, plants are covered with 6-10” long spikes of tiny, fragrant white flowers, which are extremely popular with bees and other pollinators.

The flowers are followed by berries that start out red, and ripen to dark blue-black. These berries are a big treat for wintering songbirds, but should be avoided by humans - like many members of the genus Prunus, their seeds contain cyanide. Want to avoid the berries altogether? Do your main pruning in early summer once the plants have finished blooming. 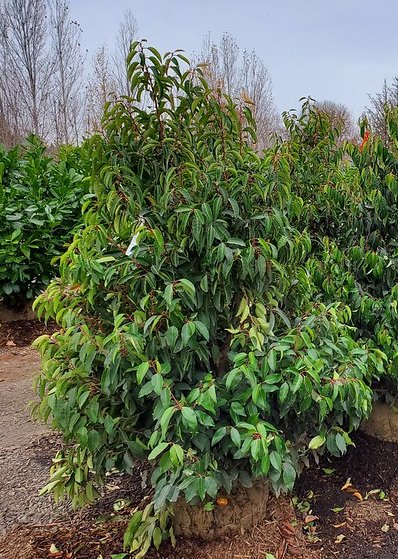 Left untrimmed, mature Portuguese Laurels can reach between 20’-30’ tall and will get about 10’ wide. These plants tolerate pruning well, though, and can be kept to 10’ or so with regular pruning. Ideally, they should be planted around 10’ apart. But if you’re in a big hurry to not see what’s on the other side of your hedge, they an be planted as closely as every 6’. Plants generally grow about 18” or so per year, although this is variable and dependent on the type of soil they’re growing in - plants in clay soils tend to grow slower than plants in loamy or sandy soils.

Portuguese Laurel grows best in full sun, but will also tolerate a bit of afternoon shade. They do prefer well-drained soil; if you are planting in clay, you’ll either want to plant them with a high crown or on a slight mound. During the first year or so, they’ll prefer a good, deep soaking once a week. Once established, they are relatively drought tolerant and will only need deep watering a few times a month. 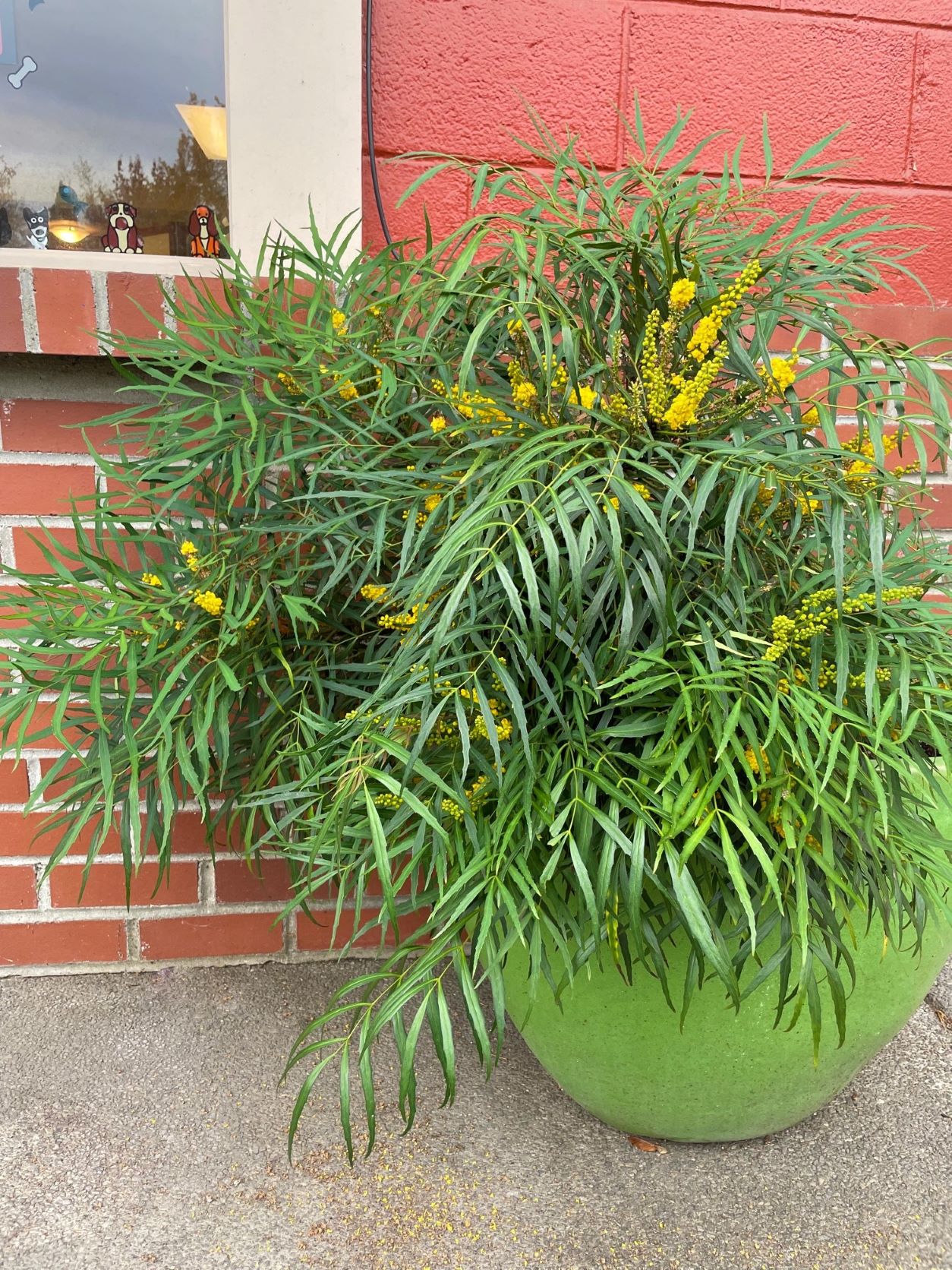 If you’re looking for a compact, easy care evergreen shrub that provides year-round interest - and will thrive in a dry shade garden - consider Mahonia ‘Soft Caress’!

I like to think of Mahonia ‘Soft Caress’ as the gentler, more approachable relative of our beloved native Oregon Grape (Mahonia aquifolium). Like Oregon Grape, ‘Soft Caress’ is a drought-tolerant evergreen shrub with fragrant sunny-yellow flowers. However, unlike Oregon Grape, its leaves and stems are thornless and soft rather than sharply poky and leathery.

‘Soft Caress’ is a great plant to use if you’re looking to bring a bit of texture into your dry shade garden. Its leaves look a bit like palm leaves – with slender, thread-like leaflets arrayed along a graceful central stem. For maximum effect, try planting it with some of the broader-leafed shade loving shrubs like Hosta, Hellebore, Osmanthus, and Viburnum davidii – or underplant it with dry shade-loving perennials like Epimedium and Heuchera.

From late fall to early spring, flowers appear in long ‘candles’ held above the foliage. These flowers not only help to brighten the winter garden, they’re also a great source of nectar for pollinators and other beneficial insects during the winter and spring, when few other plants are in bloom. The flowers are followed by decorative silvery-blue berries that add to the visual interest of the plant – and are popular with songbirds.

Mahonia ‘Soft Caress’ gets about 3’ by 3’ and maturity. It prefers part shade (morning sun is ok) to full shade and well-drained soils, and does well in containers as well as in the ground. This graceful, low maintenance shrub will be a welcome addition to your shady garden!