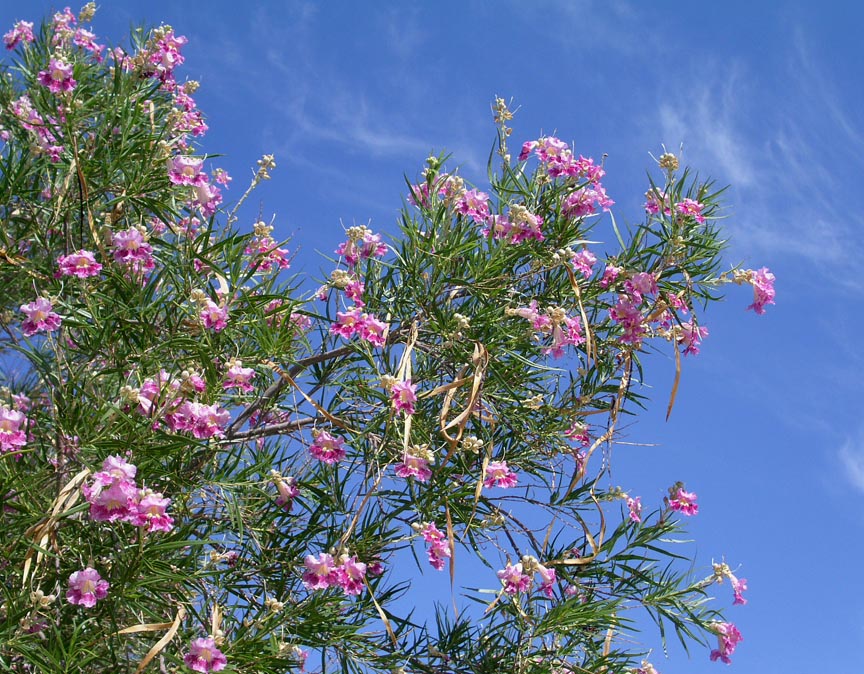 Thinking of creating a small, shady oasis in the middle of your drought-tolerant garden? Chilopsis ‘Bubba’ might just be the tree you are looking for!

Desert Willows are native to desert washes throughout the southwestern US and northern Mexico. Despite its common name, Desert Willow is not actually a willow (its closely related to Trumpet Vine and Jacaranda), but its long, narrow, dark green leaves are reminiscent of willow leaves. ‘Bubba’ has large, fragrant pinkish-purple flowers that begin blooming in early summer (ours are blooming now) and last well into fall. These plants really come into their own during our summer heat, when other plants start to slow down. 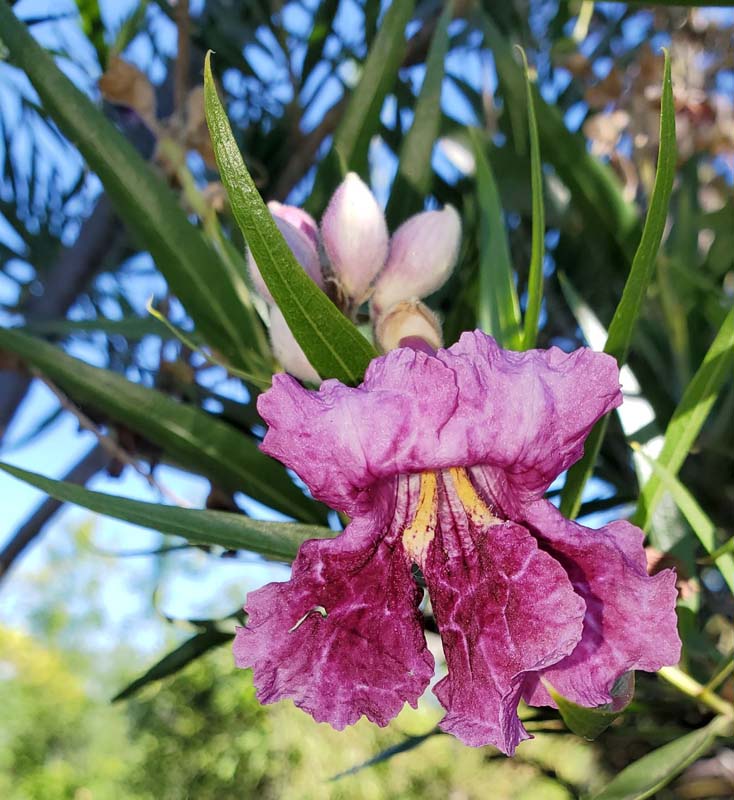 ‘Bubba’ is a small (15’ by 15’), fast growing tree with an open growth habit and attractively textured bark. It prefers a hot, sunny location and is hardy to at least Zone 7. We have seen it growing at the Denver Botanic Garden though, so we’re assuming that mature trees can withstand even colder temperatures. Plants are quite drought-tolerant once established, but will also tolerate deep, infrequent summer watering. They do need well-drained soil. If you have clay soil in your yard, consider planting it on a mound or a berm.

‘Bubba’ combines beautifully with other drought-tolerant, heat loving plants like Oenothera, the Salvia ‘Mirage’ series, Callirhoe, Penstemon pinifolius, Zauschneria, Monardella, Hesperaloe, and Perovskia to create a vibrant, colorful garden that really shines during the heat of summer. Even better, think about placing a bench under your Desert Willow, so you can enjoy its dappled shade and watch the hummingbirds and other native pollinators that flock to your mini-oasis!

Linden trees are, literally, a sweet addition to the home landscape. Their fragrant, nectar-rich flowers are a delight for humans and pollinators alike. But full-sized lindens, which reach 35’ to 50’ tall at maturity, can overwhelm a small yard. And that’s one of the many wonderful things about ‘Summer Sprite’.

‘Summer Sprite’ is a natural semi-dwarf tree that reaches just 15’ tall by 10’ wide at maturity. It has a lovely rounded pyramidal shape with dark green, heart-shaped leaves. The fragrant, creamy-yellow flowers appear in early summer, and foliage turns a rich golden-yellow in fall.

Linden trees are beloved by beekeepers (if you get a chance, try some linden flower honey!). In fact, when these trees are in full bloom, you can often hear the happy buzzing of bees from several feet away. The flowers, when picked and dried, can also be brewed as a delicious honey-scented tea – just make sure to leave enough blossoms for our pollinator friends!

“Summer Sprite’ thrives in average, well-drained soils and can be grown in full sun to part shade.

Zelkovas are real ‘problem solver’ trees for gardeners and landscapers alike. This super-tough elm relative prefers full sun and is tolerant of a wide variety of soil types – including heavy clay soils. While they prefer regular watering when young, Zelkovas are relatively drought- and wind-tolerant when established. They can be successfully planted in a variety of situations: in lawns, as street trees, even in parking lot islands and buffer strips (aka ‘hellstrips’). In fact, two of the Zelkova varieties listed here are smaller trees (less than 25' tall), which makes them the perfect choice for smaller areas. In addition to all this, Zelkovas also bring great fall color to the landscape - ranging from golden yellows to fiery reds, depending upon variety.

Here are a few of the Zelkova varieties Shooting Star carries regularly:

‘Wireless’: A smallish tree - just 23’ tall by 36’ wide – with a broad, spreading crown; bright red fall color. Because of its low height and broad spreading shape, this cultivar has an ideal shape for street plantings under utility lines.

‘City Sprite’: Roughly the same height as ‘Wireless’ (24’ tall), but only 18’ wide. Compact, dense, and semi-dwarf, this is the perfect little tree for tight urban spaces. Summer foliage appears brighter green than typical Zelkova, and fall foliage is a buttery yellow.

‘Green Vase’: ‘Green Vase’ is one of the taller Zelkovas - 45’ tall by 30’ wide – and has a graceful vase shape, with upright, arching branches. Its medium-sized, dark green leaves turn shades of yellow, orange and rusty red in fall.

'Musashino': ‘Musashino’ is another columnar Zelkova, 45’ tall and just 15’ wide, with a lovely orange-yellow color in fall. It’s an ideal tree for street use, with tightly upright branches that allows good vehicle and pedestrian clearance beneath its delicate green canopy.

Redbuds are lovely small trees: sturdy and adaptable, with rosy-pink spring flowers. Their size – 20’ tall or less – also makes them an excellent landscape choice when you don’t have the room for a larger tree.

Redbud flowers appear in early spring, cloaking the bare branches in small sweet pea-shaped blooms. The flowers are followed by beautiful heart-shaped leaves in a variety of colors, depending upon variety (see below). In general, redbuds prefer full sun and well-drained soil, and are relatively drought tolerant when established. Redbuds are also pollinator friendly and even relatively deer resistant. The one place where they can get a little picky is that they don’t like to have their roots disturbed. When planting a redbud, avoid loosening the roots before transplanting – the less root disturbance they have, the happier they are!

Here are some of the redbud varieties Shooting Star generally has available:

‘Oklahoma’: Oklahoma is one of the most heat tolerant redbuds we carry. Intensely red-pink buds open to a bright magenta pink. New leaves have a coppery tinge that matures into a dark, glossy green. Mature trees can get to be 20’ tall by 25’ wide.

'The Rising Sun': This redbud features lovely lavender flowers in spring, but its most striking feature is the color of its leaves. New leaves are a deep apricot color that fades into a soft yellow, followed by lime green. The Rising Sun is less tolerant than most other redbuds, and will benefit from a bit extra afternoon shade. Mature trees are just 8’ to 12’ tall, by 8’ wide.

Western Redbud (Cercis occidentalis): This is our local native redbud. Anyone who has driven down I-5 into Redding in the early spring has noticed these tough beauties growing on the hillside. Western redbud is extremely drought tolerant and also tolerates heavy soils better than other redbuds. Slow growing; 15’ tall and wide.

Pluerrys, Pluots, and NectaPlums combine the flavors of your favorite stone fruits in new and exciting ways. These hybrid stone fruits have been growing in popularity over the past few years, probably because they are so darned tasty! In fact, all of the varieties carried by Shooting Star are frequent taste-test winners.
In general terms: NectaPlums are nectarine-peach-plum hybrids, Pluerrys are plum-cherry hybrids, pluots are apricot-plum hybrids – just imagine the flavor possibilities! Note: hybrids are the result of cross-pollinating two different varieties of a plant, producing an offspring - or hybrid - that contains some of the traits of each of the parents. Hybrids are the result of a natural process - not to be confused with GMO's!
Spice Zee NectaPlum is the only self-fruitful one of the bunch; the others require a pollinizer in order to set fruit – generally another pluot or a Japanese plum (Santa Rosa, sometimes Burgundy).

However, this doesn’t necessarily mean taking up more space in your yard with a second tree. Many backyard orchardists are now planting multiple fruit trees – sometimes up to four - in a single hole – which means you could plant a Pluerry, a few Pluots, and a Plum in the same space that one tree would take. In addition to saving space, planting multiple trees in a single hole tends to have a dwarfing effect on all the trees – making them easier to harvest. For more information on this technique, check out Dave Wilson Nursery’s Backyard Orchard Culture article here. Here are some of the varieties Shooting Star currently has available in bareroot.

Spice Zee NectaPlum: A white-fleshed, nectarine-peach-plum hybrid. Skin is dark maroon at fruit set, and turns pale pink when ripe. Fully ripe, this fruit is unparalleled in flavor and both nectarine and plum traits are easily detectable. Tremendous purplish pink bloom in the spring, followed by a flourish of red leaves which mature into lush green in mid to late summer. Self-fruitful. Very productive.

Sweet Treat Pluerry: This taste-test favorite is a complex interspecific hybrid, predominantly of plum and cherry, combining the sweetness of a cherry with that summer fresh plum zing. Much larger than a cherry, this precocious and prolific variety will hang on the tree for over a month, and the colorful fruit make Sweet Treat a true ornamental. Pollinizer required: Burgundy or Santa Rosa plum, or Flavor King Pluot.