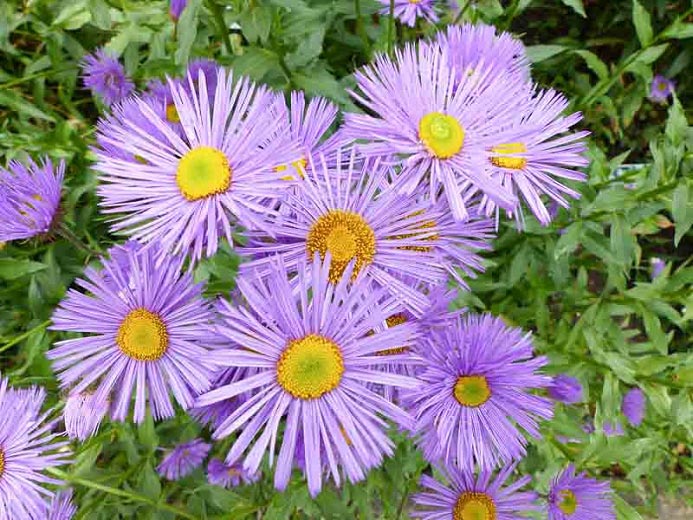 Erigerons – also known as Fleabanes – are a group of perennials that manage to pack a whole lot of wonderful into a sweet little plant. They’re also absolutely charming. Their bright, cheery, abundant, daisy-like flowers bring a smile every time you see them.

To begin with, Erigerons are both long-blooming and evergreen. With a bit of deadheading between blooms, you can expect them to flower from Spring well into Fall. They’re also easy to care for. Most Erigeron varieties like full to partial sun, prefer well-drained, lean soil and are fairly drought tolerant and deer resistant once established. Erigerons also combine well with other perennials – softening edges, filling in empty spaces, or spilling over rock walls. Try planting them with other drought tolerant plants like Eriogonums, Penstemon, Verbena ‘De La Mina’, Scutellaria, and ornamental grasses.

The place where Erigerons really stand out, though, is their ability to attract a wide variety of pollinators – especially butterflies and smaller native bees. Butterflies love their platform-type flowers, which give butterflies a place to sit while nectaring. Bees really appreciate the long bloom season, as Erigeron’s flowers generally appear before most other perennials begin blooming here in the Rogue Valley, and will last up until late-blooming favorite like Asters and Goldenrods begin flowering.

Here are a few of the Erigeron varieties Shooting Star Nursery carries regularly: 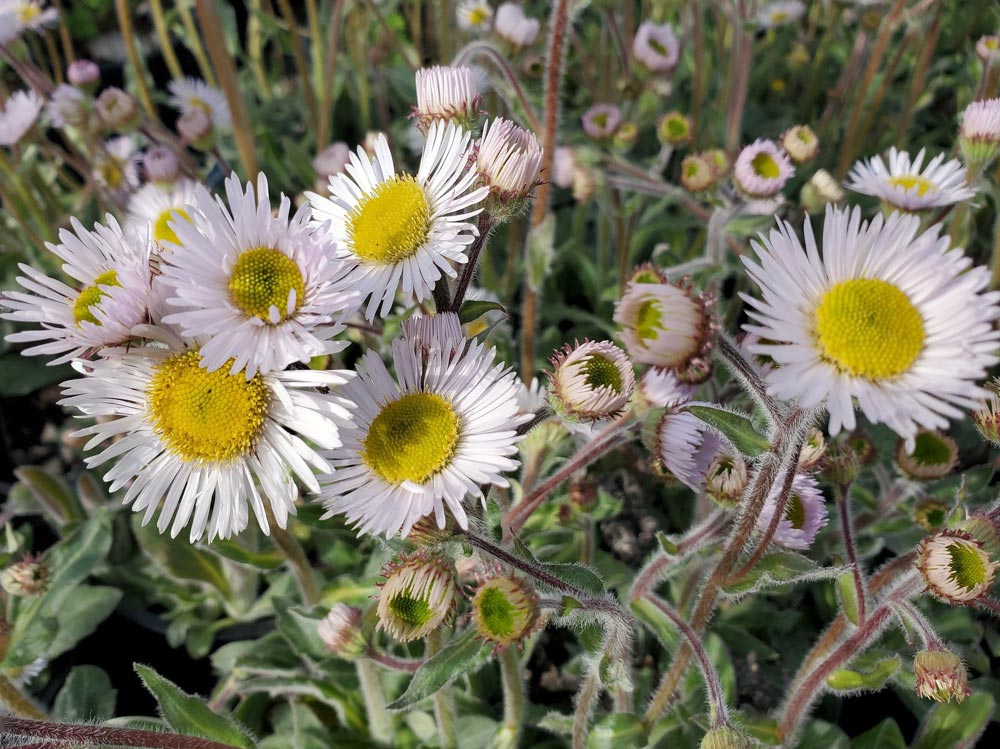 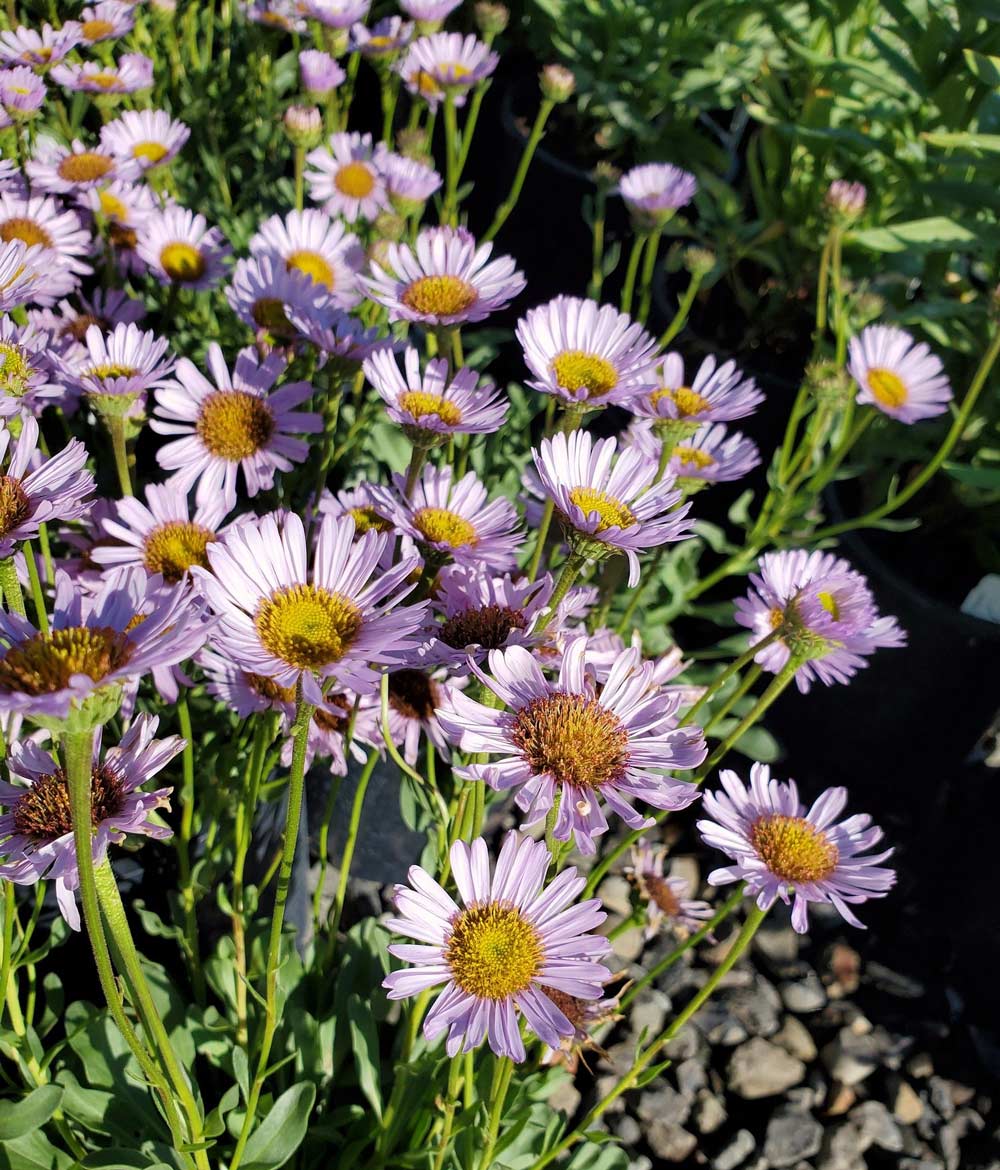 Erigeron ‘Wayne Roderick’: ‘Wayne Roderick’ begins blooming in mid-spring, and features large purple flowers, up to 1 ½” across with gold centers. Plants reach 12” tall by about 18” wide. ‘Wayne Roderick’ will tolerate a bit of afternoon shade, but will also be fine with full sun if you can provide them with deep, weekly waterings during the summer months. 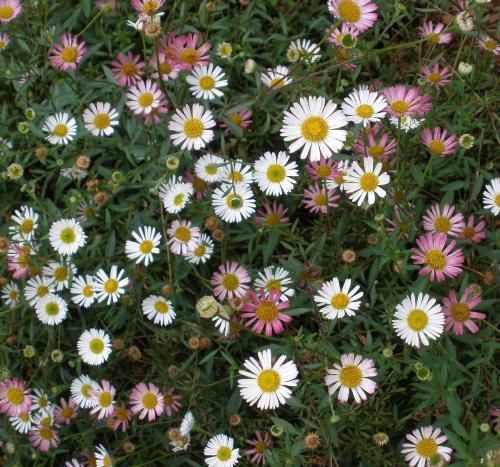 Erigeron ‘Profusion’: Erigeron ‘Profusion’ is aptly named – this plant is generally covered with flowers from early summer into fall! The flowers are smaller than ‘Lynnhaven Carpet’ and ‘Wayne Roderick’, but they more than make up for it with their sheer exuberance. Flowers range from white to pale pink, with both colors appearing at the same time on the plant. ‘Profusion’ is lower growing than the two varieties listed above, generally reaching between 6-8" tall, making it a great choice for border edges, spilling over rock walls, or even growing in containers.