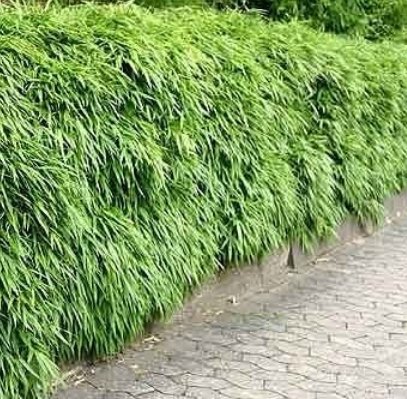 Clumping bamboo (Fargesia ‘Rufa’) is as visually attractive as it is remarkably effective for a privacy screen. With all of the classic characteristics of lush, evergreen bamboo that we love, it reaches a moderate height of 10 feet tall, making it a great option for easy maintenance.

'Rufa' is one of several species lumped under the common name ‘hardy bamboo’. They all have the same tight clumping growth habit and mounding form that doesn’t spread far from their original planting, and they grow well in both sun or shade. When compared to other 'hardy bamboo', 'Rufa' is more heat tolerant and able to handle full sun without leaf curl, and is the most cold-hardy.

The perfect location is somewhere with at least four hours of filtered sun or better. It will grow faster with more sun, which means a faster privacy screen. Keep in mind that sunnier sites will require more watering not just because of evaporation. They consume more water as they grow faster, and prefers well-draining soil that is rich in organic material. 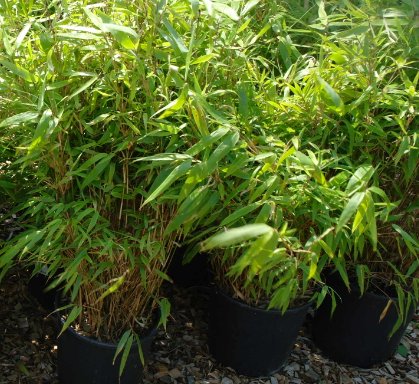 Adequate watering during the transplant establishment period is the key to success. They should be watered well until the soil is saturated and moist, then allowed to dry out before the next watering. The amount of time between watering has many variables so it’s helpful to have a moisture meter or a way to check the moisture content at least 6-8 inches below ground level.

Remember when we mentioned ‘low maintenance’? After your bamboo is established, other than making sure its water needs are met, it is virtually self-maintaining. Just leave the dropped leaves on the ground for a winter mulch to insulate the roots and retain moisture over winter and summer. As an added bonus, it will help keep weeds down in spring, and eventually, break down releasing matter and nutrients back into the soil.